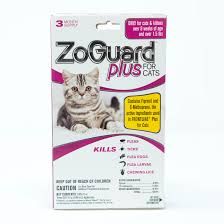 The SAME amount of the SAME active ingredients delivering the SAME protection for a lot LESS! Breaks the flea life cycle by killing all stages of fleas: Eggs, Larvae, and Adults. Zoguard Plus for Cats kills 4 different species of tick including those that may transmit Lyme disease. Zoguard also rapidly eradicates chewing lice. ZoGuard Plus for Cats is waterproof and will remain effective even after bathing, water immersion, or exposure to sunlight. Zoguard Plus for Cats is manufactured in the USA and EPA registered. MPD Direct is an authorized